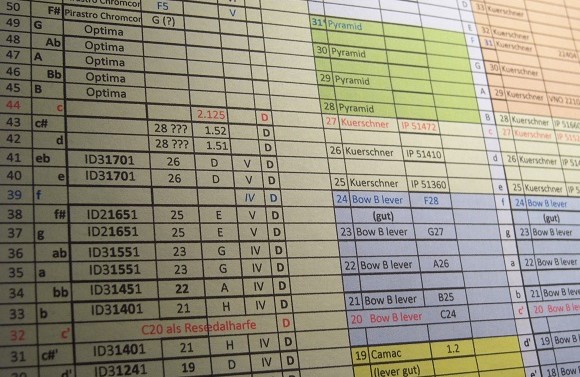 Comparing string charts to improve the sound on my instrument.

This image is an excerpt from an excel sheet where I compare string charts from my various harps. It shows the strings at the same pitch (name of the note and octave, e.g. A440).

There are several confusing things about string charts for harps. For one, they start counting the octaves from the top down, starting with Eb, as the older pedal harps had a range of 6 octaves from Eb to Eb (43 strings).

Well that goes back to the earlier single action harps, where one could get anything from 3 flats to 4 sharps (only). Similarly we tune our fully levered harps to Eb, unless we favour Ab (some earlier sheet music for Irish/celtic harp asks for 4 b’s). Should I mention that my diatonic (celtic) harps are tuned to Bb, but for a very different reason? 😉

Modern pedal harps have strings added on both sides (top & bottom 😉 ), which gets you into “octave zero” at the top!

So anyone who wishes to change a string on a harp, has to find out which octave the string is in, and not to forget to count down from E(b) to F and not C to D, or B to C.

I found this very confusing at the start because I was already well used to the music theory system of differentiating between octaves, going upwards!

This octave system is my reference until today, and I go to the trouble of writing onto new string envelopes the relevant note and octave in this way, e.g. a’’’ or  a3, g (small octave) or G (great octave).

Some German harp makers like the Klangwerkstatt and others use this system, I guess that’s where I really started using it a lot as I got a few of my instruments from their harp making workshops..

Some harp makers/ string makers seems to have a different numbering system for their individual harps, usually counting down from the top. Furthermore, often the string at the top is considered number 1, no matter what note, which can lead to a different numbering system for different harps from the same maker – but it is “user friendly”. Once you know your harp model you order “string nr. 12 counted down from the top”.

I use CD pouches (old fashioned yokes!) to keep my spare strings in the right order. There is only one thing worse than a string breaking during a gig, and that is all the envelopes with spare strings being mixed up in the bag and it takes ages to find the right one!

The standard “celtic harp” of today has 34 strings from low C to high A. This wasn’t always the case. The ancient Morley I started on spans 4 octaves G to A (30 strings). My first harp made in a harp making workshop went from low E to high G (31 strings). Why “E”? Well I guess the influence of the old octave-system described above. I call it E instead of Eb because for the first 3-4 years I had no levers and the string was actually tuned to E natural.

Some of the bigger “standard” celtic harps then go down to low A and high C (38 strings). Why “A” ? – because of the influence of classical music theory on the making of “celtic” harps, C major and parallel A minor dominating the picture. With this reasoning I advised one Irish harp maker to extend the range of his bigger harps down to low G, seeing that G major was an important key in Irish music.

Back in the 1990ies I had already boldly added a low D to my Sievert (ash) harp, where “technically” there hadn’t been any space for another string!

This former “D” is now a C- string (and red), but that’s only after this ash harp had undergone major transformations. I had mentioned them previously but this will be for another blog!

The second (or third) harp I made at a harp making workshop (can’t remember the order, as I attended around 6 or 7 harp making workshops in total – I even wanted to become a harp maker but that is for another story), and one of my “long-term relationships”, was the famous “green harp” (the harp maker was horrified when I declared I was painting over the lovely cherry wood with green dye).

This green harp, a bohemian harp from Klangwerkstatt also started at low Eb and went to high F only. Another harp that had an extra low D added (I’ve no close-up of this). I didn’t bother with a lever on those low D’s.

As the space was tight, one had to play these extra D’s  “sideways” – projecting their lateral vibration “outwards” so they wouldn’t hit the next string or front pillar.

The plan was to also add the high G and A as they are needed in some pieces arranged for celtic harp (seeing that this is the standard now). Adding low strings was easy, but for the high strings I would have had to take the harps apart, which would have been a bigger operation…

I’m regularly experimenting with tunings, like tuning down to 432 Hz, which isn’t very sociable but some reckon it is a healthier vibration. I couldn’t find solid scientific evidence for these claims but it’s interesting to experiment and widen one’s horizon (lots of experimentation with tuning went on in my twenties and thirties, but that’s for another blog!).

The slightly lower string tension seems to suit my fingers, but does it enhance the sound? Slightly thinner strings might do the same trick, at concert pitch.

Furthermore, with the chromatic harp, there are a few things playing into this as well, like shifting the crossing point, or changing the crossing angle (I can’t do very much about these) and definitely the angle at which each finger approaches a string – which in my case is still work in progress.

Playing in the Middle of the Strings

On the diationic harp, we tend to play in the middle of the string. Exemptions are techniques like “bas dans les cordes” (play low in the strings) and “près de la table” (play near the sound board) which can be found in sheet music for classical harp.

Furthermore a reason for not playing in the middle can be a low string tension (one has more grip a bit higher or lower), a slap bass technique used in south American or jazz harp, or an acrobatic lever technique which doesn’t allow going too far from where it’s all happening, to name a few.

Shifting the crossing point can have a huge impact on the sound, as we mostly approach the strings near the crossing line to have instant access to both rows.

As the 6/6 harp has no “favourite key” like the 7/5, ideally the crossing point is in the middle of the strings.

Firstly, that’s where the strings deviate the most when vibrating, so if the string tension is too low, they will hit the neighbouring string and make horrible, not very “harp-like” sounds – especially if the latter string is vibrating too.

One can counteract this by either adapting one’s technique with damping previous strings, projecting the string more sideways, or generally by playing softer. Another solution is to get a harp with wider string spacing (what I did). Higher string tension is only advisable if the harp can withstand it – I’ve learnt that the hard way!).

Secondly: if it’s a big harp and the crossing point is high, especially in the bass, it’s very hard on left shoulder/arm. Sitting slightly higher can solve this problem, but can create other issues, like changing the angle at which the right thumb approaches the lower row, not to talk about a possible twist in one’s spine/lower back.

With the Pleyel harp, the crossing point seems to be way lower than the middle of the strings (experts correct me if I’m wrong), which has the above explained advantages. This seems due to the fact that the two rows, where meeting the sound board, are relatively close to each other (compared to my chromatic harps), and relatively far from each other where they meet the neck – the neck is extra wide, especially for the bass.

The sound of a string changes a lot depending on where it’s played (and at which angle). So if the crossing point is low, with the same hand the sound changes a lot between playing strings in the upper or lower row.

With Pleyel or other 7/5 cross strung harps, like with the piano, we have a “favourite key” (C major). So possibly if some sharps or flats sound a bit different to the “naturals”, it’s possibly not such a big deal. Here, playing comfort and feasibility prevail over the ideal sound balance of individual strings.

However, in the 6/6 system*, all keys are equally distributed over the two rows, and an even sound should be achieved as much as possible.

*The 6/6 system: two rows of opposing whole tone scales cross each other: