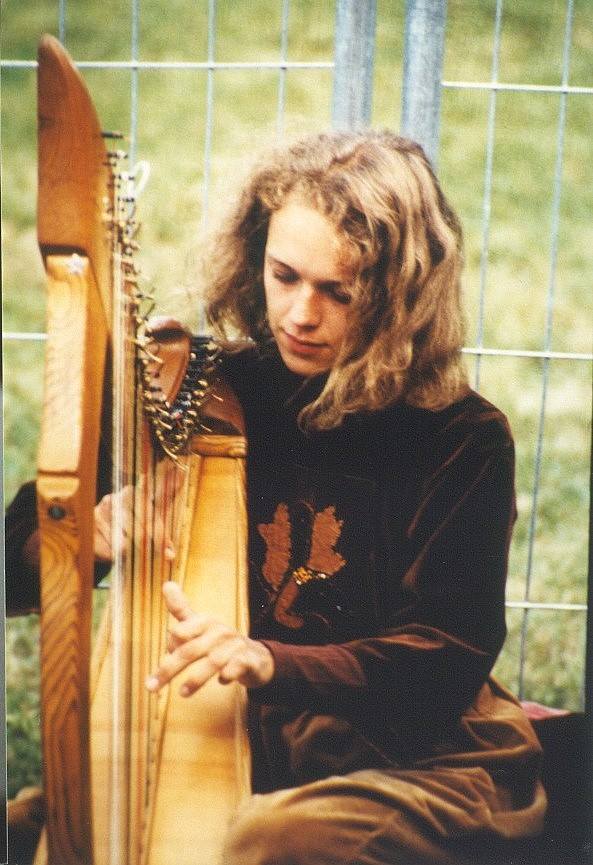 In this picture from 1996 my ash harp has gut strings & my first set of levers. These were bronze levers by Peter Brough, which added considerably to the overall weight of my harp!

They were going the “wrong way”, as in they were down when engaged! I loved them because they were easy to flick, one could even switch 2 or even 3 at the same time, which made me experiment with wild harmonies! I also tried to play preludes by Bach (like the famous one in Cm) and other more chromatic pieces. These levers were very “pointy” though, so I took a file to round off each end.

As I took classical pedal harp lessons at that time I had to relearn my whole repertoire with the new hand position, which slowed me down considerably. The gut strings were buzzing on these levers, and the wire strings were denting the softer brass, which also lead to buzzing, so eventually I had to replace the levers again.

Before continuing my story, I must also add that I lived far away from my harp maker, had no car – no way to go and get anything fixed by an expert at that time!

I must say some more about strings:

As I mentioned in the first chapter, string charts were somehow still “experimental”. If the same harp makers make perfect harps today, at the start, especially when it comes to strings, there was a lot of trial-and-error going on. Especially the octave below middle c is not easy to manage, I’ve seen many harps with weaknesses in that area.

The winding wasn’t “tight” enough though, so it was impossible to “grab” a string, to just “get hold of it”. If you play with fingernails, this doesn’t cause a problem, you just “pluck” it. But I was playing with my finger tips, and I had to “anticipate” every movement: By the time I could “get hold of a string” and stretch and release it, a lot of energy and time was wasted!

I concluded that the string tension just wasn’t high enough and tuned the whole harp up by one whole tone step, so I would play in C and it would sound in D. I loved the sound but it only half resolved my problem… the skin on my left hand fingers would flake off because of the too much friction between finger and a not very smooth string surface.

I added longer screws to secure the front pillar at some stage. This is a picture from underneath the harp, where the pillar meets the bottom plate (today this harp has a different front pillar, but about that later):

Another fun detail about experimenting with strings during these times (my wild twenties): putting fishing line and bicycle brake cables, and platted strings (like on African kora) onto my harp. The fishing line is handy if one has no spare string, the platted strings sound dull, but the brake cable: DON’T TRY THIS AT MOME!!! (breaks your harp & hurts the fingers).

Why did I change to gut strings? Because I changed my harp technique around 1994.

Why did I change my harp technique?

Well, I lived in Liege, Belgium, and I was already playing jigs & reels & a lot of Carolan pieces & earning a living while busking, but I was more or less the only one for many miles around playing “celtic harp”. The other person I knew was Patrick Dourcy, and I had heard about Fanchon Daemers at the time, but she had moved away to Brittany at the time. So my technique must have looked “wrong” to any “expert”.

While busking with my harp (sitting on that low wine box), I met several classical harpists.

One was Madame Bronkaers, who gave me my first classical harp lesson at the crossroads of Rue St. Paul, my usual spot, with everyone watching! She also pointed out to me that my harp was tuned to the wrong pitch (I had tuned it by ear in fifths – possibly a bit flat compared to concert pitch, but tuned in itself) – no electronic tuner back then. Thomas had one but it was a big fancy thing that cost a fortune. I had a tuning fork and my ears.

The other harpist I met was Yannick Vanden Broeke who unfortunately I completely lost out of sight. She owned an amazing golden Erard gothic style with which I fell in love – so magic!

(She later generously lent it to me during my studies at Musikhochschule Aachen & in return I cleaned & polished it & did and extensive job in fixing rusty tuning pegs with soap, chalk and very fine sand paper. I also remember completely restringing it. This was because the modern pedal harp strings which were on it had put too much strain on it and the neck was pretty twisted, the forks out of line).

Yannick impressed me very much with her soprano voice and the natural confidence with which she walked in and out of the music conservatoire in Liege & Bruxelles, knowing she was an excellent musician. I looked up to her, having started my musical career very late in life with no or little guidance (I never saw myself as a “real musician”, rather a “chancer”). She came up with the idea of me getting classical harp lessons, and I was very excited to attend harp & solfège at académie Grétry, also cours d’harmonie & chant choral.

I was very lucky & privileged to get Sophie Hallynck as a teacher for 2 years (she was replacing the current teacher). I got to rent a pedal harp off Arnica Kallfelz in Cologne and practiced mad (always stopping just in time before the blisters), and kept busking, hence the gut strings & higher string tension. I even appeared in a documentary in 1996 called “Les Rues de Liège”. One can hear in this clip that my sound is relatively dull – this is due to the fact that my teacher Sophie always gave me the old strings off her harps (I couldn’t afford “new” strings back then). I still have the habit of using strings till the last moment and recycling them (with knots).

The string in this picture is too short to go inside & around the tuning peg, but adding an extra piece will do the job! Any knot that ends up above the bridge pin is acceptable! The added piece should have the same gauge as the string to be patched.

In the same spirit, I tend to leave my string ends dangling around in curls or wound along the tuning pegs: if the string breaks below at the sound board, it can be re-used.

Disadvantage of this: it can cause buzzing and rattling of course, which then in turn can be fixed with hair bands 😉 or cut off before a sound recording (just saying).

Belgium is an exciting place culturally. I was intrigued by the chromatic Pleyel harp, Yannick introduced me to Cécile Marichal at the time, and I went to a lecture about harps given by Francette Bartholomée about harps (who recorded both pedal and Pleyel harp). I was very offended when, after talking about the pedal and the chromatic harps, she called the celtic harp an “instrument for children”. Well that didn’t go down well with me!

In an antique shop I came across another Pleyel harp, but in a terrible state, for crazy money, but still spent hours looking at it, dreaming. I was fascinated by the fine-tuning mechanism.

The idea of adding strings rather than buzzing levers was very appealing, and since I owned an electric drill and a few tools, two holes were drilled into my poor ash harp, to cross in a g# as an experiment (I blocked the holes up again, it didn’t really work out).

Another detail in this picture: The brass elements were added later, as the strings started to cut into the wood (and caused buzzing). They were nails which I bent with pliers, cut off the head, and inserted into pre-drilled little holes.

An expert might also see another, rather hidden detail: The soundboard had been thicker initially, one can guess this where the grain of the spruce meets the hardwood. I made the soundboard thinner to improve the sound of course ;-).

I did a rather rough job on blocking up the upper hole in the neck (to my defence I must say it was tapered for the tuning peg, and my beech stick cylindrical):

Two things are interesting in this picture here: The new levers (Loveland) but also a big mistake I made at the harp making workshop in 1991: The surface onto which the levers are mounted should be flat & perpendicular, and in my artistic “momentum” I rounded it off!

Which leads to no lever being in line with the strings, causing more undesired buzzing…

I wonder if any harp maker would be willing to fix this?

These weren’t the wildest changes that this poor harp had to undergo, because I was never completely happy with the sound/strings and decided that the strings should be longer at the same pitch and started the adventure of inserting a longer front pillar with all the implications, but that is a long and very funny story for another day.

All this to find the “perfect harp”!

I got great advice from a very good friend and high end violin maker, Falk Peters from Aachen, who is always very generous in sharing his knowledge about instrument making, and who let me use his workshop for these experimentations. He also helped me improve the sound of most of my harps with a few insider tricks, which I’m not allowed to tell ;-). But I can say so much, I shaped the soundboard like a violin’s sound board rather than a harp’s in the first place…