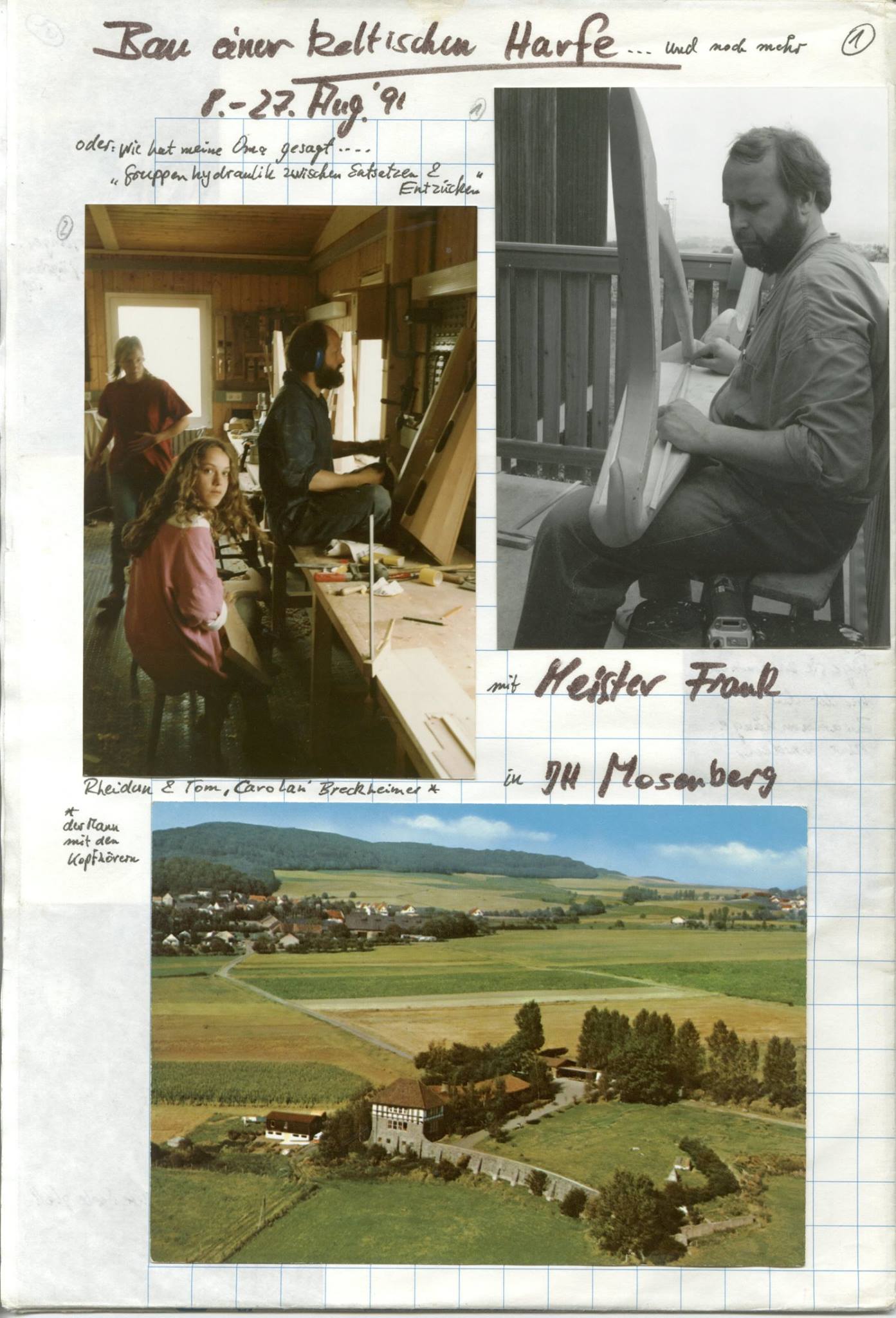 Two years ago, I was honoured to be invited to the 1st Harp Symposium in Plauen, Germany, organised by Carola & Camilla Pinder. It was exciting to see so many old friends & familiar faces, and to exchange experiences and knowledge in a creative & inspiring way.

One of the things that I was asked to do was to talk about my journey as a harpist. I was a bit surprised – panicked even… Talk about myself? What is there to say that could be interesting enough for an audience of colleagues? I saw myself being second or even third generation of folk harpers in the German harping scene, so with nothing I did I was the first to be doing it (apart from a few curious details). So I took out paper and pencil and did a wild brain storming.

In hindsight, many things that we now take for granted around harps and apprenticeship, weren’t there, my lecture turned into a collection of funny stories – I hope I can remember them!

Well the ideal situation to become a harpist:

1. There is already an interest in music in your house. Possibly your parents play instruments and encourage you to do so from an early age. They have money to pay for an instrument and weekly lessons, and drive you to the lesson and back.

2. Your harp is of good quality, properly stringed, with an even and ideal string tension, a bright tone, levers which don’t buzz, strings which respond easily and don’t touch neighbouring strings while vibrating.

Well how did I come across harps? It wasn’t on TV because I didn’t have one. In 1989, when I was 18, my mum came across a guy busking in the near city of Aachen, just across the border into Germany, and she invited him to play a house concert in our living room. Thomas Breckheimer – and how did he come across harps? His buddy Robbie had studied in Edinburgh and came home with a van full of old instruments. Out of this collection came two old Morley harps, like this one:

I was lucky enough to borrow this Morley and Thomas showed me the first steps on how to play (he was self taught, but went on later to study pedal harp).

At the time, other curiosity, one couldn’t just go and show up with a folk harp & get harp lessons – Thomas tried and the harpist from the orchestra just sent him home – this wasn’t a real harp (he was playing an Aoyama 34 strings I think at that stage). So he had to figure it out for himself and this spirit of learning and exploring alone was passed on to me and his other pupils, we didn’t need much “mothering”, and we got great mileage out of the tiniest bit of information.

Thomas was already into folk & trad, played a multitude of instruments including piano, low whistle, concertina, guitar, so he knew what he wanted to achieve on the harp, and already at the time there were a lot of jazzy chords and funky rhythms being used in his accompaniments.

He got me into exploring, improvising, doing “mad stuff”. He insisted on me learning tunes by ear rather than by sheet music. And when he said “by ear” it meant humming along with the tune until it was memorised (without seeing it being played on a harp! – he was using a tin whistle so I didn’t know what note he was playing), not the modern spoon-fed harp lesson style where the melody is cut into chunks and memorised bit by bit, with fingerings and note names given.

The Morley had no levers, but blades, some of them buzzing, some of them loose, some not keeping in place when engaged, and none doing the correct pitch, but it was an exciting start! (Insulation tape is one of the remedies to keep the blades from slipping).

The strings were nylon, with everything below middle C feeling like spaghetti, making blupp blupp rather than ploing ploing. The string charts back then were experimental, not scientific.

In 1991 Thomas brought me along to a three week long harp making workshop with Frank Sievert, where I got my first harp that I could call “my own”, made from ash wood.

Making your own harp, even under guidance, is an exciting process. It also makes you less shy to modify your instrument afterwards – this alone could take up another hour of stories!

The following image is the “ash harp” before one of the various “modifications”, it shows me busking in 1994. It had no levers for the first 3 or 4 years, so I transposed everything into C major and related modes. As Thomas taught me to think in “degrees” or “steps” rather than note names only, it was a good practice in music theory, and in exploring in depth the modes like dorian and mixolydian, and to understand chord patterns. One can see a curiosity on this picture: I had stuck little white felt pads between the strings, where I would produce semi-tone steps with my tuning key – South American style!