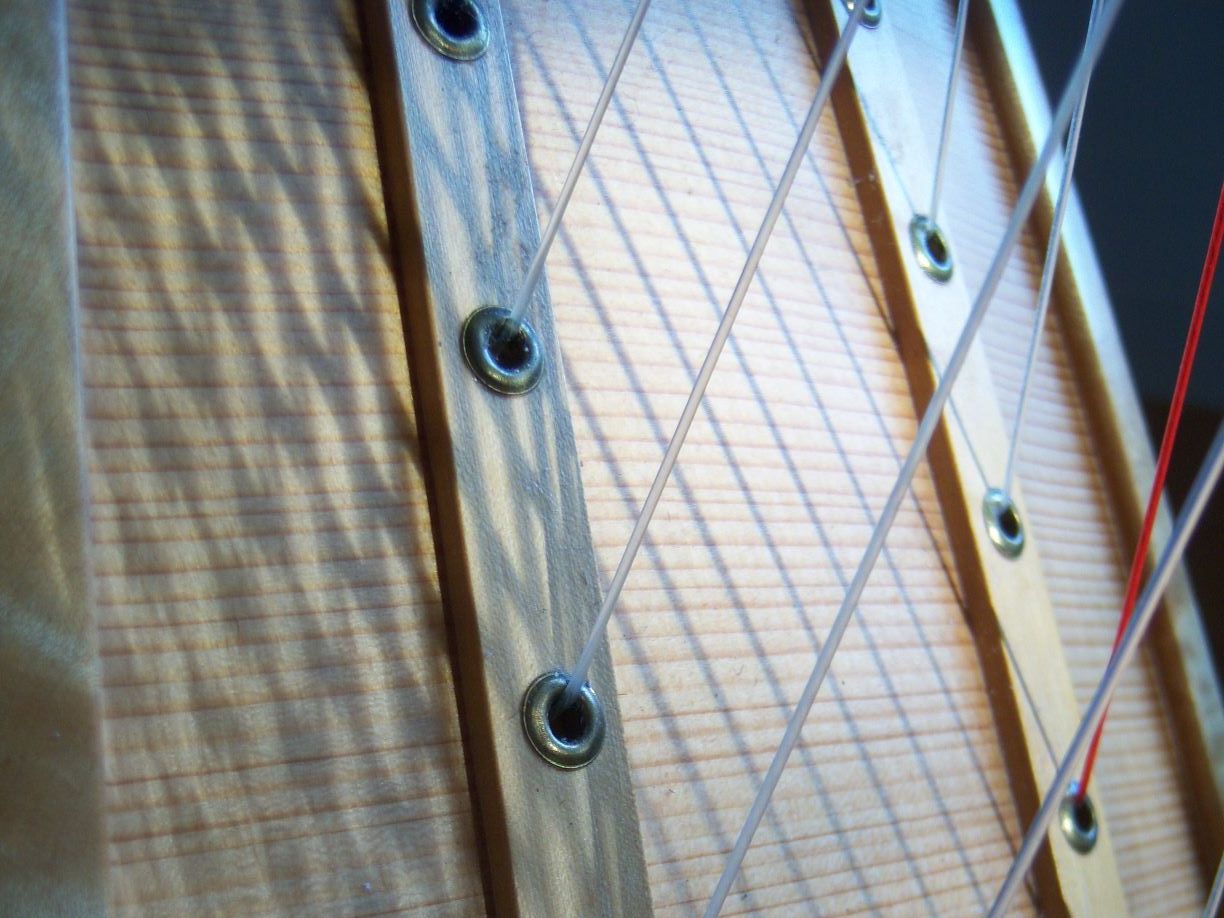 In the last week I recalculated string gauges for my big chromatic harp and re-strung it twice (!) and the result is amazing.

Over the last ten years this harp has gone from carbon fibre strings to nylon strings to gut strings, now I’m not changing strings as such but just gauges.

I have the suspicion that the fact that it’s double strung and thus two rows of strings are putting additional pressure onto the sound board means the string gauges might have to be calculated differently from a diatonic harp of the same size/same string chart in length & pitch.

Even the fact that there are two rows rather than one makes the sound board behave in a different way, possibly moving less freely.

For future harps, it might be interesting to study the behaviours of double strung sound boards. Different positions of the two rows to each other or their position on the sound board have an impact on the crossing angle of course, but more than likely also a huge influence on sound.

Maybe they should be in position “one third” and “two thirds” like the ratio for the fifth (the nerds might recognise Pythagoras in this). They would – but these are all wild speculations – hit the “nodes” in the lateral wave, same as the middle strip on a diatonic harp would hit the “octave node”. Maybe I’m mixing up things here as my knowledge of waves isn’t great but maybe it gets a ball rolling? Should these nodes, if they exist on a sound board, be used for attaching strings, or the opposite, should they be left vibrating freely? Maybe nodes is the wrong term but it would certainly be interesting to look into these simple ratios which create all our harmonics/harmonic intervals. The ratio for the octave being 1:2 or fifth 2:3 is the base for my wild speculations in the case of the two harp types.

In addition, as mentioned in an earlier blog, the crossing point is shifting the playing point away from the middle. A string which is meant to be played higher or lower rather than in its middle might need a different gauge too!

Releasing tension from the sound board by using thinner strings allows it to vibrate more freely, which leads to more resonance & sustain, not to talk about the quicker response of the strings & thus less effort for fingers & muscles. I’m stating the obvious here but the result is amazing. A harp (as I once said to a novice harp maker, who was looking for advice on strings), is mainly *strings* surrounded by a supporting frame and amplifying box.

Not to underestimate the importance of timber, shape, thickness, grain when trying to improve the sound of an instrument, but it’s the strings which create the sound! There are three (four) factors playing into string calculations. Pitch, length, gauge (and material).

Too little tension, especially in the case of a chromatic harp, would lead the strings to touch each other when vibrating. This can be counteracted by adapting one’s technique, but only to a certain tipping point, where one would lose dynamic range.

The latter is why I got a harp maker (Henrik Schupp) to design a harp with wider string spacing, over ten years ago. This very same spacing allows me now to lower the tension without provoking (physically) clashing strings.

In this video from December, with the higher string tension, one can guess that it demands a bit of effort to play these strings, one had to pull hard to get a good sound out of it, and even at that it sounds “dull”, especially when compared to the modern lever harps. I felt that I could never practice more than 3 hrs a day, it was a real workout!

It was a bit like my first harp (the ash harp), where I kept changing things around. With the ash harp though I didn’t stop with varying only pitch, gages and materials, I also changed the length of the strings as a last resort!

That’s a story for another day…

Watch this space for new video clips (coming soon!) to judge for yourselves – is it the same harp or a different instrument?