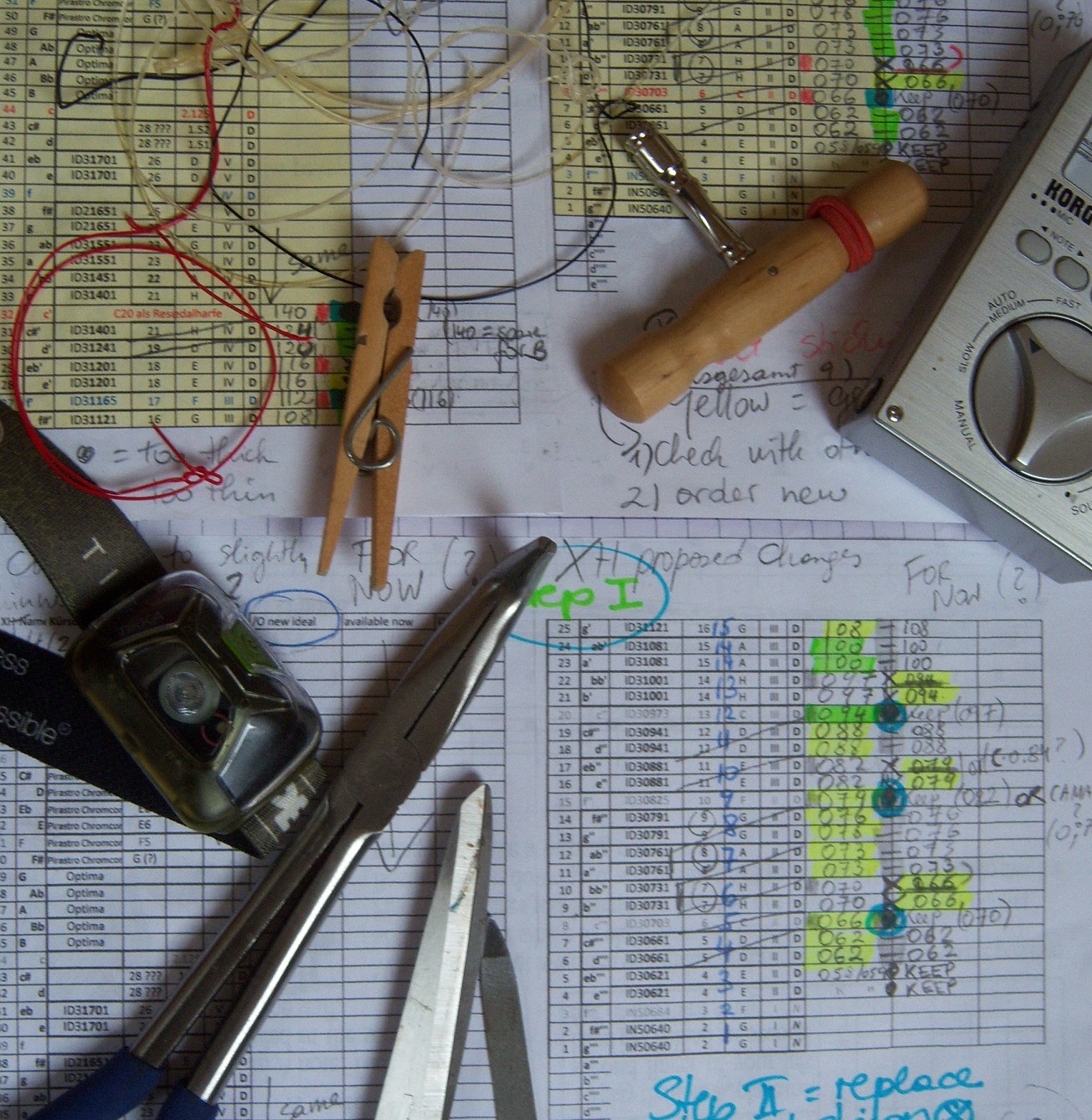 Having the right tool for the job, more string stuff, and again the no – waste approach

In my last blog I was comparing string charts and was wondering whether it was a good idea to put on slightly thinner strings for more sound and playing comfort. I’m talking about my big chromatic harp in this case. On the picture you can see charts with a lot of pencil scribbling in two columns, enhanced with symbols & markers.

As a result of the pandemic I got into the habit of using pencil (2B), rather than pen, for all my notes, especially my calendar which consists of more cancellations & postponements than secure bookings, as all my colleagues can relate to. My 2020 paper calendar was ruined in a few weeks, so pencil & rubber became the tools of preference – I’m not fully digital yet.

Ideally there should be no big jumps in gauge of course. The coloured strings – I would have to order those, unless I do what we always did back in the 90ies – black and red marker belonged into any harp first aid kit!

Thinner strings, if I try to re – use what’s already on the harp and move them one step down (roughly): Every single one of them would be too short!

In theory. Well I’m glad I left all the curls dangling like this:

So half of my old strings actually weren’t too short at all!

Another thing I was glad about was that I kept all sorts of bits of old strings.

A content life seems to be to find a balance between Marie Kondo (“I wish I hadn’t dumped that yoke last week”) and the no – waste approach of “This could come in handy one day”. Both reason and intuition are good tools for decision making here 😉 .

These bits of string now would suit perfectly to add on to the old strings and make them fit:

So the combined scribbles gave me an “ideal compromise” of 3 gauges: Too thick (coloured strings, as I left them in place, for now), ideal (for now – to be tested of course), and too thin (where I didn’t have the calculated gauge but the one below. This was due to skipping the black and red ones to use the next available colourless strings).

I went ahead and must say I am very pleased with the result!

Well, every time one changes the tension on harp strings, it also affects the tension on the whole instrument, mainly the sound board, but also the frame (ever tried to tune a little African harp without front pillar? 😉 ).

In this case, releasing tension from the sound board made it relax & increased the length of the strings in that place ever so slightly, stretching them and thus making them go up in pitch.

That’s why new harps take so long to stay in tune – the whole instrument has to settle into this new state of being under pressure, not only the strings.

In the same way, a reused string keeps the tuning faster than a new one. When a string broke on one of my rental harps, I would sometimes, when suitable, take a string off my own harp, which was “pre – stretched”, rather than a brand new string, to replace it. This wasn’t out of meanness towards the student of course, but out of this practical approach of increasing the chances of my students playing on a tuned harp!

Another little detail of my no – waste approach: When we learnt to make the harp knot (the regular one!), we would insert a little piece of thick (gut) string or wood to anchor the knot at the wooden strip behind the sound board.

Bow Brand would even give you a little box with gut string bits for this purpose:

When they were used up, I was cutting up my own old string bits, and even washing line. When moving to Ireland and thus back to the countryside, I came across used strimming wire (strimming as in cutting grass with a rotating piece of plastic “wire”). What a waste of plastic I thought, only the ends get used. So I started cutting the leftovers up to use it for securing harp strings.

One German harp maker was using the bits coming out of the rivet for the string holes at the sound board. Very handy because one is just after “making them” & they’re at hand. Unfortunately they are a bit like nails – too sharp angled for my harpist fingers, I replaced them soon!

Now, after so much time cutting corners I’m back to gut string ends, or better, wood, as I started wondering about the sound- maybe even these little pegs/wires/plastic bits have an effect on the overall sound?

Will I tell you what little wooden pegs I use right now? 😉 I have a wooden eco – hair brush which is falling apart – the tiny wooden “pegs” (beech wood – perfect material) are getting a new life in the belly of my harp every time it gets a new string.

(And who knows what the brushes’ handle will come in for handy when they’re all gone!)

String ends at the top can be very sharp and spiky! With wire/wire core strings I go through the trouble of bending them with pliers, into a U-shape. Additionally I might put insulation tape or plaster strip around to prevent injuries.

Sharp string ends sticking out can be prevented when putting them on in the first place. Feed the end back under the winding towards the neck.

With nylon strings: it depends what tool is being used. If it flattens the string while cutting it, this might cause very sharp edges too. Not only is this unpleasant to the fingers, it also destroys the harp bag and one gets constantly caught in them with one’s sleeve while tuning. I tend to use a lighter to melt the ends to round them off. If you are doing this, please do it in a well ventilated area, especially with carbon fibre whose fumes are very toxic.

Carbon fibre strings are very popular with lever harps, unfortunately my fingers don’t like them… Instead of building up callous, it gets scrubbed off, so the more I play the less protective layer I have. It might be a combination of skin type (dry skin) and playing technique but that’s why I had to get back to nylon and gut strings instead.

Apart from that I’m not sure if I like the sound. It’s very flashy, bright, convincing at first listen. In my head though it seems as if some of the harmonics were clashing somehow, but it’s hard to describe how or why. And the modern Irish harpers in a way are proving me wrong with their amazing playing on those very same strings! So I guess it’s just a personal thing…

I my harping life I had also a lot of string damage because of sharp edges.

My first harp’s tuning pegs were handmade, and where the string goes through the hole, a sharp edge had to be taken away afterwards. I had a very slim round file for this purpose.

In another case I had a harp where the hard wood on the strip on the sound board was “eating” strings (they kept breaking at that point rather than above at the lever). In this case my round file was still too thick, and I actually used wound metal strings to act as a file, to round off this edge (had to take out every single string to do this job of course!).

In the case of my big chromatic harp, I had trouble with the bridge pins. Usually the string passes by the bridge pin parallel to the groove, and perpendicular to the pin. With the cross strung harp the angle changes, and with this also the way the string is meeting the bridge pin.

You can see in this picture how the string is diverted, and sometimes it was meeting one of the very sharp edges of these hexagonal pins – which wouldn’t have been an issue on any “normal” harp.

So again, strip off all the strings, get out your flat file and get rid of 6 sharp angles x 61 strings!

Pleyel got it right with the widened top part (arch), from this perspective. In addition, it created a wider crossing angle which seems to be an advantage to easily reach both sides and produce an even sound (contrary to what I claimed in my last blog). Nicole Tate, who plays a Pleyel style harp, gave me some interesting food for thought in her comments on facebook. I’m looking forward to finding out more from her!

For measuring precise string gauges this is a very useful tool:

I never explained all the tools featured in the top picture. Here it is again:

When changing strings, one usually needs the tuning key (this one is marked with a hair band to tell it apart from another one who looks the same but which fits a slightly bigger tuning pin). There are as many different type harp tuning keys as there are strings on a harp! 😉

The electronic tuner is a fancy one, but it’s not digital. The scissors are use to cut off excess string.

When reusing strings, without undoing the proper harp knot, one has to feed them into the soundboard holes from the back. Hence the head lamp and long flat bent pliers.

The nail file to undo harp knots at the tuning peg side – I had gone over the top with a non slip knot for the thinner strings. This knot is very useful with carbon strings, and nylon, but not really necessary with gut strings. Of course I had to undo the knots to reuse the strings; they were already too short as it is.

I explained the string bits. The clothes peg – that’s used to keep a new string from slipping out of the soundboard, when making a new harp knot at the back. When putting on a new string, it usually is fed into the sound box from the top – easier to hit the hole that way! When fiddling at the back to get the harp knot right, the string can slip through, especially if it’s short. The clothes peg will prevent that from happening!

Clothes pegs and hair bands belong in any harp travel kit. Not only for holding sheet music on a music stand (if you’re not gone digital yet), but also for securing a cheap guitar tuner to the neck (if you’re not using a self tuning harp yet 😉 ).

Handier than a phone app, when surrounded by background noise, and hands-free!