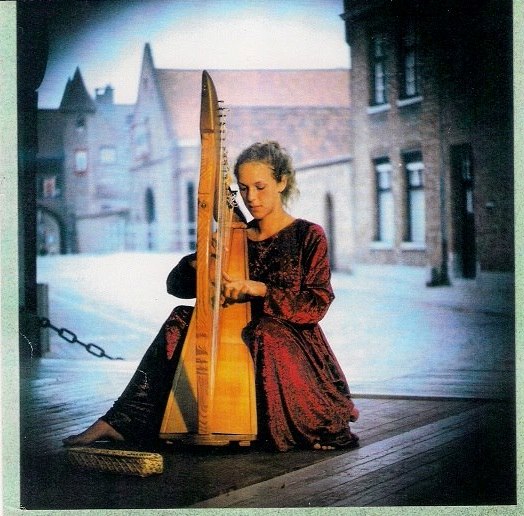 Reidun grew up in Belgium, and at age 12 started to play the guitar and recorder, and to sing folk tunes.

She was also keenly interested in writing and painting. Later, her mother, a passionate dancer, took her to folk festivals (bal folk) in the region, and in 1989 organized a concert with a folk harpist from Aachen, Thomas Breckheimer. Hearing Thomas play Carolan’s music changed Reidun’s life. At the age of 18 she started to play the Celtic harp, learning from Thomas, and attended various harp events, including the famous Harfentreffen (“harp meeting”) and the Edinburgh harp festival. In 1991 she took a harp-making workshop with Frank Sievert, where she made the first harp that she could call “her own”.

In 1994 she moved to Liege and became a full-time harpist, supporting herself by busking in the streets. She also took classical harp lessons with Sophie Hallynck for two very inspiring years, but eventually decided that one’s early 20s was too late to start a career as a classical harpist. Instead she took to the road with a touring group of musicians, actors, storytellers and jugglers, playing in some of the most picturesque places of the Belgian Ardens, e.g. with the asbl Rumelin and storyteller Tristan le Rimailleur.

At the same time she also started studying at the Musikhochschule in Aachen, where she stayed for two years, with the focus on Allgemeine Musikerziehung (musical education) and harp with Helga Storck. Also at the same time she joined with Philippe Dejace to form the group Dunlin.

With the group Fasiré, based in Germany, she used the chromatic harp to explore not only Irish music, but also Swedish, Hungarian, Bulgarian and Klezmer music, with violinmaker Falk Peters on violin (bracciolina d’amore, a 5-string viola/violin) and Silvia Herl-Peters on vocals/percussion.

In 2001 she met Jowan Merckx , who asked her to play with his group Amorroma. With this group she featured on three CDs and one DVD – “Carduelis” (2003 CD), “Balance” (2005 CD/DVD), “Les Tisserands” (2006 project/CD) – and performed in concerts mostly in the Dutch-speaking part of Belgium and Brussels.

Since 2008 Reidun lives in Kerry where she teaches harp and traditional music. She has published a harp tutor in German (“Mein Schlaues Harfenbuch”, 2009); and a series of workbooks in ABC-notation (“Let’s have a Tune!”) for tin whistle, harp, guitar, banjo, mandolin, keyboard, accordion & concertina, to encourage young beginners to play together from a very early stage. Her newest publication are “My Little Irish Harp Book” (2018) and “Making Progress on the Irish Harp” (2020)

She regularly plays in various locations around Kerry with other musicians as well as a soloist on Celtic and chromatic harp (Irish & classical repertoire), and continues to play and give workshops in Ireland, France, Germany and The Netherlands. Her latest project is Amala, a duo with guitar.